The Master-at-Arms: Between Two Worlds

As a “great man, among the little ones” the Master-at-Arms held much responsibility among his fellow seamen. He was in a precarious position between two worlds: that of the common seaman and that of the warrant officer. With a responsibility to police his peers, he was in a position with high potential for alienation, often times putting himself in dangerous situations as well. The Master-at-Arms of HMS Barbadoes found himself in just such a position in 1811 when John Pogerty, a Marine, struck him, the Boatswain’s Mate and kicked the Gunner while being restrained for acting in a mutinous manner toward one of the ships Lieutenants. The punishment for striking a superior officer was almost always death, but in this case Pogerty is recommended to the “mercy of the Lords of the Admiralty” due to the fact that he seems to have saved many of his shipmates lives in the past.

The Master-at-Arms was also held to a higher standard than other seamen. He had a warrant but was not afforded the privileges of superior warrant officers. At times, the expectations put upon him strained his standing with the crew, who saw him as a potential informer. Walking the line between the fo’c’sle and the wardroom he held a difficult but critical task: maintaining the good order and discipline of a ship of war.

On a daily basis the Master-at-Arms was responsible for observing the conduct of the ships company and checking anyone disrupting its good order and discipline. Discipline onboard a ship of war was essential for the survival of the ships company. Immediate obedience to orders could be the difference between life and death in a battle or during severe weather. The officers of the ships company relied upon that discipline to keep order amongst the seamen. In the event that someone fell astray, the Master-at-Arms was directed to take charge of them as the ship’s nominal provost marshal. If punishment for an offence came to flogging, they were charged with lashing the offender to the grating and stripping his back in preparation for the cat of nine. The Boatswain or his mates would then be responsible to dole out the lashes as ordered by the Captain. In addition to those duties, as the ships day progressed and the galley fires were lit for cooking or at the time for lights out, the Master-at-Arms was responsible to see all flames extinguished onboard at their proper times.

Traditionally, as the title implies, the Master-at-Arms was responsible for drilling the ships company in small arms, pike, and cutlass exercises. Throughout the latter half of the eighteenth century though, the small arms exercise transferred to the Master Gunner and his mates. It was suggested that in appointing a Master-at-Arms, the chosen seamen should already have a martial air about him. Captain Fredrick Marryat who served in the Royal Navy from 1806 – 1830 commented as such, saying “The Master-at-Arm’s berth can never be filled up by a seaman, a soldier would answer the purpose much better”. In one such instance, Benjamin Chapman, a Marine turned able seaman and Gunner’s Mate received his warrant for Master-at-Arms in 1794. This example seems to be the exception to the rule, however, with the majority of Masters-at-Arms being selected from the seamen’s ranks.

The position was warranted by the Navy Board and any rated ship was required to have one assigned by the Captain. Despite being warranted, the position lacked any specialist skills requiring recognition (unlike the Sailing Master, Surgeon, Master Gunner, etc.) and therefore was rated as a Senior Petty Officer. Being such, by regulation of the Admiralty, the Master-at-Arms was not allowed the privileges of the other warrant officers. He rated no distinct uniform and dressed in the same manner as all other seamen. Joseph Dodge, the Master-at-Arms for HMS Acasta in 1805, clothed himself by buying a dead man’s cloths after transferring to Acasta from HMS Hercule. No special berthing was allotted for this position either, and the seaman promoted to this rank ate and slept with the rest of the crew. This could lead to complications from constantly being so closely intertwined with the men they were charged with observing. In one such instance, in April of 1804 a conspiracy was discovered amongst 20 of the seamen of HMS Montagu to kill the officers aboard. The first amongst their targets were the second Lieutenant, the Master-at-Arms, and a day mate by the name of Mr. Reed. Though the plot was put down before it could begin, it illustrates the depth of animosity that the crew had for the Master-at-Arms (or the importance of his position being eliminated for the rest of the plot to succeed). 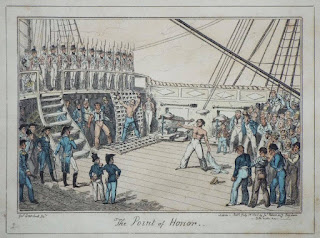 To aid in his duties, the Master-at-Arms was allowed his own mates known as Ship’s Corporals. On a 5th rate ship of war such as Acasta, he was allowed two Ship’s Corporals who could perform some of his daily duties and other tasks as directed by the senior warrants and commissioned officers. However, it appeared that in 1805 Acasta had only one, a Welshman from Abergavenny, Edward Warberton. Similar to the number of subordinates he was allowed, the Master-at-Arms’ pay was regulated according to the ships rating. Onboard ships of equal rating as the Acasta, Masters-at-Arms were paid £2 6d a lunar month, a cut up from an able seaman’s £1 13s 6d. In addition to the pay bump, the Master-at-Arms split an eighth of total prize money with the Midshipmen, the Sailing Master’s Mates, Surgeon’s Mates and the Sergeants of Marines. For a seaman with no formal education or skilled trade, the position of Master-at-Arms offered one of the few paths to promotion. With the pay increase, potential for prize money and rise in station that came with this position, it is no wonder why it would be an ideal promotion for a foremost hand.