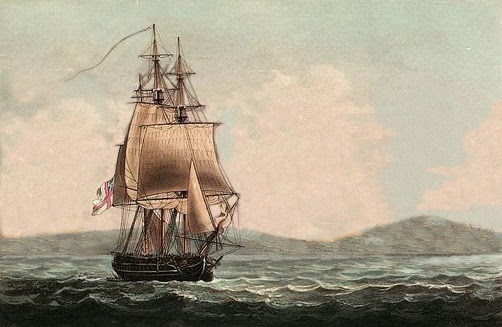 On the 12th, at 6 h. 30 m. a.m., Sir George Collier went on shore to communicate with the governor, in consequence of the damage done to the houses of the town by the shot from the Acasta and Newcastle. At 11 a.m. Sir George returned ; and shortly afterwards the British squadron, accompanied by the prize, got under way, and steered for the West Indies. We must now pay a visit to the Constitution.

The moment he saw how the Acasta was weathering him, and that he had no chance of escape by bearing up, as the Newcastle would inevitably intercept him, Captain Stewart considered the Constitution as within an hour or two of becoming a British prize. The American officers now questioned the British officers as to the manner in which the commodore of the chasing squadron would treat them ; and ; in short, began making, in regard to their clothes and other personal effects, such arrangements as they thought necessary, in the change they were about to undergo from freemen to captives. All this while Captains Douglas and Falcon and the late officers of the Levant and Cyane were blessing their stars at the good fortune that awaited them, although, as we can readily conceive, their delicacy forbade them from making a display of it before Captain Stewart and his officers. When the Cyane tacked, and the three British ships still continued in chase of the Constitution, not a doubt could remain that the English commodore, whoever he might be, was determined to have her. The Levant tacks ; and (can it be possible?) all three British ships tack after her. Here is a change ! The joy of Captain Stewart and his officers was now as extravagant as their fears had been well grounded. But what were now the feelings of Captains Douglas and Falcon and the other British officers ? What were they indeed! " The British officers on board, " says the Constitution's officer, " who had expressed the utmost confidence that the Constitution would be taken in an hour, felt the greatest vexation and disappointment, which they expressed in very emphatic terms." * From the following passage in the same account, it would appear that some one of the British officers, to save as much as possible the credit of the service to which he belonged, pretended to understand the purport of a signal that was hoisted by the Newcastle, and of which we shall speak presently. Thus: " After the other ships tacked, the Newcastle made a signal that her foretopsail yard was sprung, and tacked also. " In less than three quarters of an hour after the Newcastle had tacked from her, the Constitution was becalmed or nearly so. As soon as a breeze sprang up, Captain Stewart steered towards the coast of Brazil, and through the West Indies home ; and, early in the month of May, lucky Old Ironsides," as now she well might be called, anchored in Boston.

The three British ships, on being first discovered by the Constitution, were taken by the American officers for what, in reality, they were: the Leander and Newcastle for " ships of the line," or two-deckers, and the Acasta for a frigate. But the Cyane, according to her log, made out all three ships to be frigates, even before the Constitution cut her cables and made sail. Yet, on board the Leander, the Constitution, of 1533, the Cyane of 539, and the Levant, a flush ship, of 464 tons, all put on the appearance of "frigates." Hence, when the Cyane tacked, " Sir George directed the Acasta's signal to be made to tack after her, but countermanded the order, on observing that she would gain the anchorage before the Acasta could close with her." * It was, therefore, the respect which the British commanding officer paid to the neutrality of the Portuguese port, that permitted the Cyane to go unpursued. But, in less than an hour, a second enemy's " frigate," the Levant, tacks, and the neutrality of the port does not save her from being pursued, or from being cannonaded, " with her jib-boom over the battery," by two of the three British ships that had tacked after her. How does Captain M'Dougall reconcile this ?

It appears, now, that it was not Sir George's intention that all three British ships should have tacked after the Levant. The signal was ordered to be for the Acasta alone to tack ; but, according to the published letter of Mr. Thomas Collier, " the midshipman, Mr. Morrison, whose duty it was to make the signal, did, by mistake, hoist the general signal, " or, according to another statement, and one which bears the signature of the Leander's late first lieutenant, " in making the signal, the Acasta's distinguishing pendants got foul, and, before they could be cleared, the Newcastle mistook it for a general signal. It is a point, we conceive, of very little consequence how the mistake arose. The fact is that, of all the three ships, the Acasta was the last that should have been ordered to tack after the Levant, even admitting that ship to have been the " Constitution, President, Macedonian, or Congress, " simply because the Acasta was " weathering, " " getting into the wake of, " and the likeliest of any of the three to overtake and bring to action, the " Guerrière.'' On the other hand, that the Leander herself, if any ship did, was the most proper to have gone in pursuit of the supposed Constitution, President, Macedonian, or Congress, is clear; first, because she was " falling to leeward " of the supposed Guerrière, and next, because she was the nearest of any of her squadron to the ship that, to the Leander at least, put on so fatal a disguise. Had we seen no other statement than is to be found in the three British ships' logs, we should consider that the Leander really did tack first ; for thus says her log : "Tacked ship to cut off ship from anchorage, and made signal for ditto."

Sir George Collier was remarkable for the kindness with which he treated his officers, and for the, in this instance, most unfortunate, deference he was in the habit of paying to their opinions on points of service. By whose suggestion he tacked, let his late first lieutenant's own words determine : " When the Acasta had filled on the starboard tack, I observed to Sir George, that, if the ships standing in shore were really frigates, which it was impossible to ascertain, owing to the haziness of the weather, they would be more than a match for the Acasta. He replied It is true, Kerr can do wonders, but not impossibilities ; and I believe I must go round, as, when the ship that tacked first hears the Acasta engaged, she will naturally come to her consort's assistance." Captain M'Dougall here says " it was impossible to ascertain " whether or not a low flush ship, of 464 tons, sailing for more than an hour, at the distance certainly not of more than five miles, upon the weather beam of the Leander, and consequently with her whole broadside exposed to view, and every port, one might suppose, as easy to be counted, as the ports of the Leander herself were by the British and American officers on board the Levant, was a "frigate ;" and such a frigate as, with another like her, it would be "impossible" for the Acasta to cope with. Lieutenant Henry Richmond, who was a midshipman on board the Leander, appears to have sanctioned Mr. Thomas Collier in saying, that " all on board " the Leander fully believed that the Constitution, Cyane, and Levant were three American frigates. The only answer we shall give to this will be to subjoin the names of the five lieutenants, who belonged to the Leander at the time. 1st. John M'Dougall, 2d. William Edward Fiott, 3d. Robert Graham Dunlop, 4th. George William St.-John Mildmay, and 5th. Richard Weld. We believe it is not yet admitted by Captains Kerr and Lord George Stuart, that the Acasta was the first ship that tacked, or that the weather, at the time the Constitution was left to go her ways, was not sufficiently clear for the water-lines of all the ships to be seen.