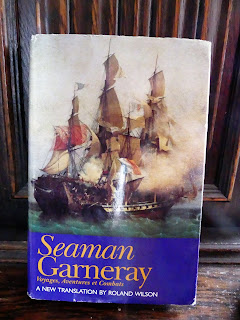 A book review by Tony Gerard

While it seems, a person could spend a lifetime reading all the various accounts of British seamen and books about the Royal Navy during the Napoleonic wars there is very little written about, or by, the opposition.

Garneray’s account is one of the few available written from the French side of the wars. Louis Garneray joined the French navy in 1796 when he was 13. Three years later he was serving as an aide to Robert Surcouf, one if the most famous French privateers. He was then captured and spent nine years as a prisoner of the British, and time he also wrote about (and previously reviewed on this website).

Garneray writing. as translated, is very readable, almost novel like in form, with many direct quotes. Written decades after the actual events this should not be taken as such. He had a tendency to stretch the truth in telling, elevating his own importance and always putting himself close to the principle characters. I would have appreciated it if he had included more of what  daily life was like on a French privateer and a bit less of the hero worship and quoted speeches of various important figures. Having said that it was a very enjoyable and easy read. I did learn some things. I was shocked to learn how lackadaisical the French navy was about desertion, especially considering the harsh penalty it drew in the British Royal Navy.

The editor and translator of the edition I have, Roland Wilson, provides a great introduction with excellent insights into Garneray as an individual, revolutionary France and the French navy and privateers at the time. He also provides excellent explanatory and supplemental notes printed on the sides of the page, much preferable to  having to look up a footnote in the back of the book!