From the Naval Chronicle 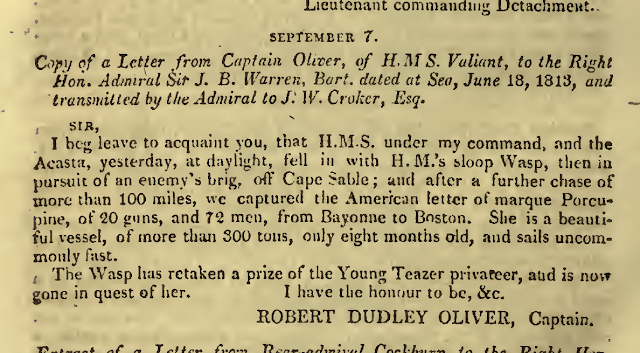 
SIR,
I beg leave to acquaint you, that H.M.S. under my command, and the Acasta, yesterday, at daylight, fell in with H.M.'s sloop Wasp, then in pursuit of an enemy's brig, off Cape Sable ; and after a further chase of more than 100 miles, we captured the American letter of marque Porcupine, of 20 guns, and 72 men, from Bayonne to Boston. She is a beautiful vessel, of more than 300 tons, only eight months old, and sails uncommonly fast.
The Wasp has retaken a prize of the Young Teazer privateer, and is now gone in quest of her.


I have the honour to be, &c.
ROBERT DUDLEY OLIVER, Captain.

Email ThisBlogThis!Share to TwitterShare to FacebookShare to Pinterest
Labels: In the News, Miscellany, Mission 2