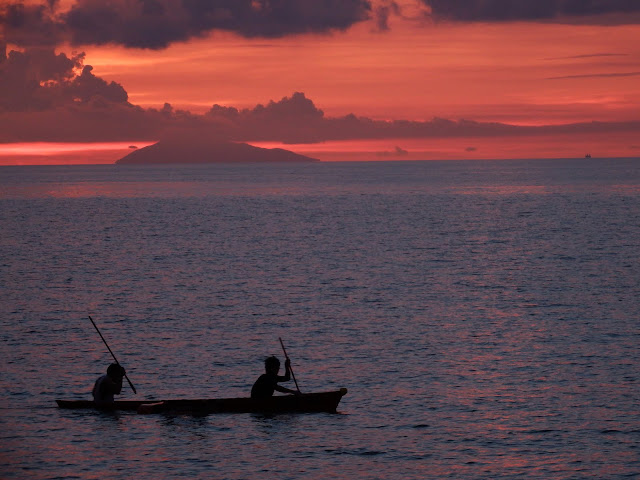 So the old Frenchman what is the Doctor’s mate told a yarn for true, I am not sure that it is so, for he has an endless supply of them, and his being French besides, but they are an amusement.

It seems his wife is a headhuntress from the Spanish Philippines. I know this for a truth because I heard the Doctor speak of it to Lieutenant McLean. It seems that she is now a domesstick for the Doctors wife and Lieutenant McLean said he would like to get an exotic for his wife also. I suppose that is what passes for a prize among the better sorts these days.

Which he had been wrecked while a prisoner of the Spanish on that coast and that is how he come to be among the headhunters. So after he has been with them a number of years he decides he wants to return to Christian folk and his wife comes with him.

They take a canoe that he has rigged with a sail and make their way from careful from island to island. He wants to hide from the Spanish, see? Whenever they come upon other Indians he shows them a jawbone of a fellow the Headhunters killed and tells them the jawbone is from a Spaniard, and they are welcomed.  No one likes the Spaniards. But they mostly try to keep away from other people. His plan is to try and make the coast of China and find an English ship to work passage on.
So they finally make a long haul across the South China Sea to the coast. That is the part that is the hardest for me to believe, cause he aint much of a sailor now, how could he be better when he was young? Which when they get to the China coast they are going to be even more cautious. They have heard China pirates are worse than Spaniards and they decide to find some desert place and rest up for a bit.

They finds a place that looks right, all jungle and such and they put to in a nice little cove. The Frenchman says he dont know if it were the actual coast or an  island just off it.

He has a headhunter spear, which he goes hunting with and kills a big lizard, which they is glad to have for a change. So his wife goes to boil some in a pot they has – which was her best thing- and she spits the rest to dry over the coals for later.

Now they is taking their ease as the pot simmers when all at once they her a fellow cough in the forest nearby. Both of them hears it. They figure it for some Indians sneaking up.

So without a word the wife takes the pot and the spits and heads for the canoe and the Frenchman starts backing down with his spear pointed toward the woods.

About the time the wife is in the canoe and the Frenchman is just shoving off something runs out of the jungle and jumps over the Frenchman toward the wife on the stern. Quick as a cat- or quicker in this case- she whollops it on the nose with the pot and jumps over the side.  It then turns on the Frenchman and he does the same. The canoe has outriggers, which is the style in the Pacific, which they both end up hanging onto. The tide was ebbing fast and already they is in deep water.

So they listen to whatever it is eat what was to be their dinner off the spits and what spilled from the pot. Then it realizes that it is afloat and gets frantic, running back and forth on the canoe, then trying to climb the puny little mast, which shredded the sail and it was all they could do, one on each outrigger, to keep it from flipping it. The Frenchman said they was double scared of having it in the water with them.

They stay like that till dawn, when they see it is a leopard they has caught. The Frenchman still has his spear which he thinks maybe he can spear the leopard, but after a few tries he gives it up, as the leopard has the advantage and he is afraid if he provokes it too much it may jump on him.
So, they hang there all day and the next, without a drop to drink. The worst he says was listening to the leopard drink the water from a clay pot they has. A few times they come close enough to swim to an island or ashore, but they discuss it and decide that to be afoot on this wild shore they would just be eat by another leopard or something worse.

Several times sharks come close, but thankfully they offer them no trouble. On the third morning the tide is on the rise and it pulls them shoreward and up a creek. The leopard, which has been asleep on the bow wakes up, and as soon as they gets close jumps two fathoms to shore. The Frenchman and the wife jump back in and paddle frantic against the tide till they get well away.  They had some coconuts in the canoe otherwise they would have died of thirst he says cause they was both to scared to go back ashore for water. He says after that they tried to only stop at small islands which they thought was less likely to be infested with leopards.

He told this for a truth, and I can believe it all but for him sailing across the South China Sea. Mayhaps his headhunteress knew better how to mind a sail.

Robert Watson, aboard HMS Acasta, in a letter to his wife July 1810