Of Ship's Boys and Headhunters 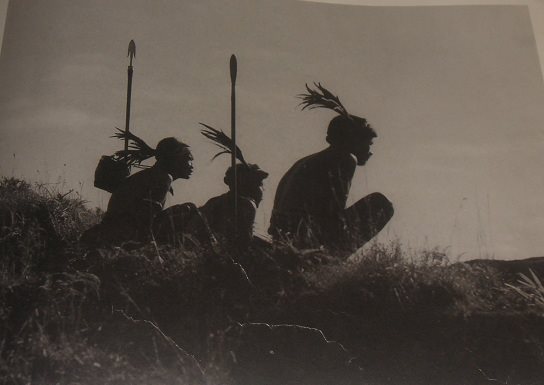 Jean Baptiste Girard, Surgeon’s Mate H.M.S. Acasta, pushed aside the hanging canvas that served as a door to the sickbay. He was just returning from sick call, which has been nothing short of miraculous. Not a single soul had showed up at the mainmast for medical treatment. Even the usual few shirkers had abstained from shaming illnesses on this day. The continuous stream of new contusions and hernias had never just ceased before. Was this a good or bad omen?

He fumbled beneath his neckrag for the key to the medicine cabinet. Pulling it out on its string he leaned forward to unlock the cabinet, then stopped short at a nearby snuffling sound. He peered cautiously around the cabinet’s side.

Setting back to the cabinet, knees to his chest and head on his knees was Linden, one of the youngest group of Ship’s boys. He was 8 years old, more or less.

“What are you doing?’ he asked.

Linden looked up appraisingly. The mate was French, which made him something of an outsider…which made him a potential ally when a fellow was feeling on the outs with his mates. He took the chance.

“I’m getting’ away from those blackards Grove an Coleman”. Coleman and Grove were the two other of the youngest ship’s boys.

“What have dey done?”

He again eyed the Frenchman appraisingly. In for a penny, in for a pound.

“Well…it’s like this. I miss me Mum somthin’ fierce, ‘specially on the night watches. Grove asks me why I’m so glum, so I tells him. Then he goes and tells Coleman. Then the two of ‘em makes a big jest out of it. They say I’ll never make a tar if I ain’t no braver than to miss me Mum so. Easy for them to say- ain’t neither one even got a Mum! And they was supposed to be my friends…”.

The mate sat down companionably. “I would tell you a story. Would you wish to hear it?”

“I suppose” said the ship’s boy with little real enthusiasm.

“You know I lived among de headhunters of de Spanish Philippines when I was a young man?”

“I heard it said. That charm ya wear is part of it”

“Yes. So, when I first come to live among dose people I live in de “agamang”. Is a house where all de boys and unmarried young men of de village live, until dey take a wife and make a home of dere own. A few old mens live dere also, widowers most, to keep order.

So dere was a boy dere. His name was “ Kalpahi”. Some nights he would wait until all was asleep, den sneak out, back to de house of his Mama an den sneak back again before day. When de other boys of his age would catch him at dis dey would make cruel jests of him. Dey had a hateful rhyme about how he wish to make a bird catching net of his Mama’s pubic hair.”

“Yes, is strange, but dat was true. He sneaked out much more dan he was caught. I know because I sleep near de door an I see him. De other dat sleep dere is an old man. An he sleep very sound. Kalpahi knewed I seed him an don’t give him away, so we are friends of a sort

So one night Kalpahi had sneaked out to his Mama’s house and now he come back in de dark before day. He always go all de way around de village, outside the fields even, because the agamang was on de other side of de village from de house of his Mama, an he don’t wish to run across someone going out to take a piss or something.

As he come back almost to de village he stop, because he hear someone whisper- but is in de wrong language.

Now some time before some young men of our village had found a Tuwali alone in de forest. Dey kill him and bring back his head, because dey is anxious to be warriors.

Now our village was at peace with de Tuwali and de elders of de village is upset with des boys. Dey send many pigs to de Tuwali so dat dey don’t start a war.

So now Kalpahi  is just outside de village an he stay still an look close, and as de darkness begin to go he see dere is six men hid at de edge of de fields. An dey are men- not boys. Dey have come so quite not a dog has bark. Dey are de relatives of de Tuwali dat was killed, come to avenge him!
So what is Kalpahi to do? He knows dat dey wait to murder whoever comes to de fields first. If he shout a warning- dey will perhaps kill him first! Kalpahi hears a baby cry, some peoples talk- de village is waking. Soon someone will come to de fields.

Kalpahi can wait no longer. He shout a warning as loud as he can- all de dogs of de village begin to bark- and he run away-across de rice levee. De two most close of de Tuwali give chase to him, but de others- luck for him- run another way.

Also luck for Kalpahi is a growed man, a warrior, named “Pugong” is going out to piss. He have his spear widt him, because he is a warrior and he feel something is not right dere. He see dese two give Chase to Kapahi and he give chase to dem.

Now de Tuwali most close to Kalpahi is man width much longer legs dan a boy an soon he almost catch Kapahli. He try to spear him, but de spear only hurt Kapahi a little an Kalpahi run more faster. Twice he cut Kalpahi widt his spear. Finally when Kalpahi is almost to de end of de levee de Tuwali trows his spear. It miss Kalpahi, it go under his arm, an stick in de path beyond him. When Kalpali reach de spear he take it an turn to face de Tuwali.  De Tuwali has drawn his bolo- is a long chopping knife- and he jump down at Kalpahi- an Kalpahi spear him right in de chest! It kill him dead right off!
Just den Kalpahi hear a shout “Come quick! Dere is a Tuwali here!” Is Pugong calling to de men of de village.

Kalpahi try to pull de spear from de dead Tuwali, but it don’t come out, so he take de bolo and run back up on de levee. De second Tuwali has turned to face Pugong. He have a spear and shield, but Pugong only have a spear and he has been hurt, but still stands. Quick as he can Kalpahi runs up from behind and chop de Tuwali in de neck widt de bolo- when he does Pugong  spear him.

So now Kalpahi has killed two enemy. An warriors widt tattoos dat say dey have taken heads demselves!  He have earned de right to have warrior tattoos, doe he is only a boy. All de other boys want to be his friend. None ever make jest of him now.

De elders is unhappy, but not widt Kalpahi or Pugong, for dey is heros. Again dey send pigs to de Tuwali, who agree to not have a war. Dey agree dat de family of de killed fellow was wrong to try an avenge him after dere village had accept de first pigs.”

“So whot’s head hunters killing one another got to do with me and Grove and Coleman?”

“Here is de lesson- no one is brave all de time. Kalpahi was brave when it matter. Dat is what is important. When we go to quarters, I am glad to be safe below decks in de cockpit…”

“But you’re a Frenchy, nobody expects you to be brave”. The guileless of youth.

“Perhaps” chuckled the mate “ but as I say no-one is brave all de time. You remember when we take de “Polly”?”

“I hear dat you was taking a message to de Captain an a ball strike de deck right beside you. I hear dat Mr. Calhoon drop to de deck- but you did not”

‘He said t’was the shock knocked him down”

“Perhaps- but was you not afraid?”.

“I dunno. It was an important message from Lieutenant Hamilton. I didn’t think about being afraid cause I had to tell the Captain."

“See- just like Kalpahi- you was brave when it matter. And I tell you another thing- Kalpahi, even after he have tattoos- some nights he still sneak back to de house of his Mama. No one is brave all de time.”

“I tell you a truth. Before you come aboard, dere was a ship’s boy dat Hollybrass was fond of. Hollybrass teach him his knots, de ropes- all  de tings he must know to be a good tar. He got his foot crush by a gun, an we have to cut de foot off. Hollybrass is dere. As de Doctor begin to saw off de foot- Hollybrass look away. I saw dis myself. So at dat time Hollybrass is a little bit not brave. No one is all brave all de time”

“I’m sure dere were times when even Nelson was a little bit not brave, and times when he miss his Mama”