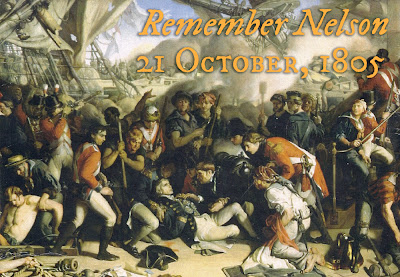 It was one of the greatest sea battles in British history and gave birth to a legend. Off the coast of Spain's Cape Trafalgar Peninsula, the British Fleet, led by Lord Horatio Nelson, took on a combined French and Spanish force to determine who would be the master of the waves. England's very existence was at stake for France's Napoleon Bonaparte was poised to send his powerful army across the English Channel to conquer the island. The only obstacle standing in his way was the British fleet.

The battle commenced on October 21, 1805 with Nelson's famous words signaled to his fleet: "England expects that every man will do his duty." Nelson had devised an unorthodox battle plan that called for his ships to attack the enemy broadside in two parallel lines, break into the enemy's formation and blast his opponents at close quarters. 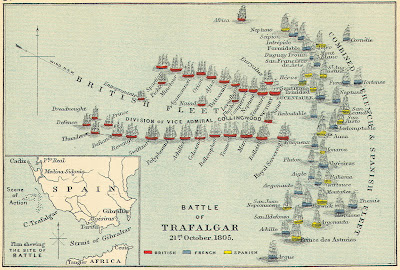 As Nelson watched from the deck of the HMS Victory the battle soon turned into a confused melee of combat between individual ships. The fighting was at such close quarters that the Victory became entangled with the French ship Redoubtable. Locked together in a deadly ballet, each ship blasted its enemy at point-blank range. From his perch in the upper rigging of the Redoubtable, a French sharpshooter took aim at a prized target on the deck of the Victory, fired and sent a musket ball into Nelson's left shoulder. Continuing its journey, the bullet tore a path through the Admiral's upper body before smashing into his lower back. It was a mortal wound.

Nelson was carried below decks while the battle raged on. He lived long enough to hear the news of the Redoubtable's surrender and of his fleet's victory after four and one-half hours of combat.


Dr. William Beatty was a physician aboard the Victory and attended Nelson as he lay dying. The doctor published his account soon after the battle. We join his story as Nelson and the Captain of the Victory observe the battle from the ship's quarter deck: 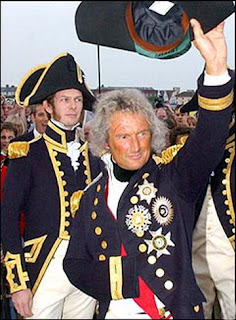 "Lord Nelson and Captain Hardy walked the quarter-deck in conversation for some time after this, while the enemy kept up an incessant raking fire. A double-headed shot struck one of the parties of Marines drawn up on the poop, and killed eight of them; when his lordship, perceiving this, ordered Captain Adair, to disperse his men round the ship, that they might not suffer so much from being together. In a few minutes afterwards a shot struck the fore-brace-bits on the quarter-deck, and passed between Lord Nelson and Captain Hardy; a splinter from the bits bruising Captain Hardy's foot, and tearing the buckle from his shoe. They both instantly stopped; and were observed by the Officers on deck to survey each other with inquiring looks, each supposing the other to be wounded. His lordship then smiled, and said: 'This is too warm work, Hardy, to last long;' and declared that 'through all the battles he had been in, he had never witnessed more cool courage than was displayed by the Victory's crew on this occasion.'

. . . About fifteen minutes past one o'clock, which was in the heat of the engagement, he was walking the middle of the quarter-deck with Captain Hardy, and in the act of turning near the hatchway with his face towards the stern of the Victory, when the fatal ball was fired from the enemy's mizzen-top. . . 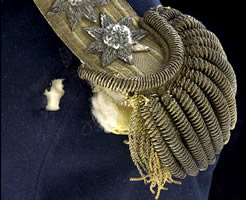 The ball struck the epaulette on his left shoulder, and penetrated his chest. He fell with his face on the deck. Captain Hardy, who was on his right (the side furthest from the enemy) and advanced some steps before his lordship, on turning round, saw the Sergeant Major of Marines with two seamen raising him from the deck; where he had fallen on the same spot on which, a little before, his secretary had breathed his last, with whose blood his lordship's clothes were much soiled. Captain Hardy expressed a hope that he was not severely wounded; to which the gallant Chief replied: 'They have done for me at last, Hardy.' - 'I hope not,' answered Captain Hardy. 'Yes,' replied his lordship; 'my backbone is shot through.'

Captain Hardy ordered the seamen to carry the Admiral to the cockpit. . .

His lordship was laid upon a bed, stripped of his clothes, and covered with a sheet. While this was effecting, he said to Doctor Scott, "Doctor, I told you so. Doctor, I am gone;" and after a short pause he added in a low voice, "I have to leave Lady Hamilton, and my adopted daughter Horatia, as a legacy to my country." The surgeon then examined the wound, assuring his lordship that he would not put him to much pain in endeavoring to discover the course of the ball; which he soon found had penetrated deep into the chest, and had probably lodged in the spine. This being explained to his lordship, he replied, "he was confident his back was shot through."

The back was then examined externally, but without any injury being perceived; on which his lordship was requested by the surgeon to make him acquainted with all his sensations. He replied, that "he felt a gush of blood every minute within his breast: that he had no feeling in the lower part of his body: and that his breathing was difficult, and attended with very severe pain about that part of the spine where he was confident that the ball had struck; for," said he, "I felt it break my back." These symptoms, but more particularly the gush of blood which his lordship complained of, together with the state of his pulse, indicated to the surgeon the hopeless situation of the case; but till after the victory was ascertained and announced to his lordship, the true nature of his wound was concealed by the surgeon from all on board except only Captain Hardy, Doctor Scott, Mr. Burke, and Messrs. Smith and Westemburg the assistant surgeons.

The Victory's crew cheered whenever they observed an enemy's ship surrender. On one of these occasions, Lord Nelson anxiously inquired what was the cause of it; when Lieutenant Pasco, who lay wounded at some distance from his lordship, raised himself up, and told him that another ship had struck, which appeared to give him much satisfaction. He now felt an ardent thirst; and frequently called for drink, and to be fanned with paper, making use of these words: 'Fan, fan,' and 'Drink, drink.'

He evinced great solicitude for the event of the battle, and fears for the safety of his friend Captain Hardy. Doctor Scott and Mr. Burke used every argument they could suggest, to relieve his anxiety. Mr. Burke told him 'the enemy were decisively defeated, and that he hoped His lordship would still live to be himself the bearer of the joyful tidings to his country.' He replied, 'It is nonsense, Mr. Burke, to suppose I can live: my sufferings are great, but they will all be soon over.' Doctor Scott entreated his lordship 'not to despair of living,' and said 'he trusted that Divine Providence would restore him once more to his dear country and friends.' — 'Ah, Doctor!' replied lordship, 'it is all over; it is all over.'

The Death of Lord Nelson
An hour and ten minutes however elapsed, from the time of his lordship's being wounded, before Captain Hardy's first subsequent interview with him. . . They shook hands affectionately, and Lord Nelson said: 'Well, Hardy, how goes the battle? How goes the day with us?'- 'Very well, my Lord,' replied Captain Hardy. . . 'I am a dead man, Hardy. I am going fast: it will be all over with me soon. Come nearer to me. Pray let my dear Lady Hamilton [Lord Nelson's mistress] have my hair, and all other things belonging to me.' . . .Captain Hardy observed, that 'he hoped Mr. Beatty could yet hold out some prospect of life.' – 'Oh! no,' answered his lordship; 'it is impossible. My back is shot through. Beatty will tell you so.' Captain Hardy then returned on deck, and at parting shook hands again with his revered friend and commander. 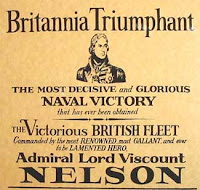 His Lordship became speechless in about fifteen minutes after Captain Hardy left him. . . and when he had remained speechless about five minutes, his Lordship's steward went to the surgeon, who had been a short time occupied with the wounded in another part of the cockpit, and stated his apprehensions that his Lordship was dying. The surgeon immediately repaired to him, and found him on the verge of dissolution. He knelt down by his side, and took up his hand; which was cold, and the pulse gone from the wrist. On the surgeon's feeling his forehead, which was likewise cold, his Lordship opened his eyes, looked up, and shut them again. The surgeon again left him, and returned to the wounded who required his assistance; but was not absent five minutes before the Steward announced to him that 'he believed his Lordship had expired.' The surgeon returned, and found that the report was but too well founded: his Lordship had breathed his last, at thirty minutes past four o'clock; at which period Doctor Scott was in the act of rubbing his Lordship's breast, and Mr. Burke supporting the bed under his shoulders.

Text taken from: "The Death of Lord Nelson, 1805", EyeWitness to History, www.eyewitnesstohistory.com (2007).