A Report from the Field Part 4 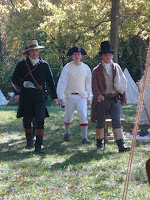 We concentrated on the American Riflemen's camp, although many theories were examined, it was believed that Sgt. Baker was real and he was in fact our man.

We spent the remainder of the afternoon surveiling the American camp as they went about their business. We noted that every man wore a black haversack at his side. We were visited by Miss Bosworth, who again assured us that Sgt. Baker was in possession of our packet and that it was IN his haversack. She also informed us that his superior had ordered that Baker was not to be left un-escorted when he left camp.

Later that afternoon, Midshipman Raley and Mr. Campbell had to return to their duty elsewhere, and Lt. Ramsey and I were issued an invitation to dine at the Harmon Estates before the ball to take place that evening.

We cleaned up and made ourselves as presentable as possible for dinner and the ball.

Dinner was a lovely three course affair with the finest company, including Mr. Cooper of the American Rifflemen, still in his green uniform, right across the table from me.

We all departed company and Mr. Cooper excused himself to return briefly to the American camp. Lt. Ramsey and I noted that upon his return, he wore his rifleman's frock and was adjusting his newly retained black haversack at his side.

Why would he wear his haversack to a ball? We noted that he had gone all the way back to camp to fetch it. Lt. Ramsey and I looked about to espy the other riflemen, all were wearing their haversacks at the ball! As we stood by the exit to the great tent, one of the riflemen passed, I stopped him.

"Are you one of the American Riflemen?" asked I.

"Y-yes." he looked near panic.

He replied that it was something that started with an A, but even then didn't sound terribly sure of himself. He was obviously nervous.

"Why are you wearing your haversack to a ball? That seems like a funny thing to wear to dance in." I queried.

"We were ordered to." answered he.

In our minds, this only served to confirm that Sgt. Baker must surely be in possession of the packet and that the entire company had been ordered to wear their haversacks in order to avert our suspicion of only ONE man wearing his haversack to a ball. We would have been able to pick Baker out immediately had he been the only one.

Sgt. Baker's only card to play was that we did not yet know what he looked like.

After the ball, we returned to the Harmon Estate for a bit of an after party, wherein Lt. Ramsey caught my eye and raised his glass.

Quietly, so that others around us would not hear above the din, he said in way of a covert toast, "To King, Country and the success of our mission!"