A Letter for Jas. Apple 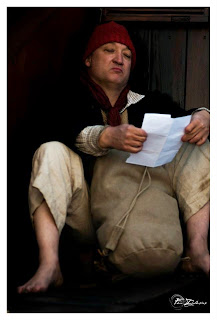 It has been nigh onto two years since last we met. Much water has gone under the keel since then. You will no doubt recall that when our good ship and Captain took little Boney s ship Avanture, I was Placed aboard as part of the prize Crew.  Oh how I Hated this at the time, having grown Fond of my old chums aboard the Acasta.  But such is Life as they say and I reckon it was for the best.  We returned to Portsmouth with our Prize and believe me when I tell you the Coin did not burthen my Pockets for long.

At the urging of the Cockswain I did entrust a few Quid to my old Solicitor back in Bristol. My girls, when they come of age, will appreciate that I did. I sailed aboard the Royal Edward- a sharp little Brig of twenty-eight guns on September last. She is fast and keen and a joy to sail-how she cuts through the water. It would make your spirits rise.  But the real news that I want to share with you now is this.  You may recall how I always longed to be on the gun crew while aboard Acasta.  I have at last got my wish.

Our lieutenant said he saw me as a lively little fellow and that I couldbe better served on the guns than as a Topman- always there on our old bark and my new one as well. So off I go to work on the twelve pounders.  It was hot work and long days let me tell you. Our Captain, Reynolds, says within ear shot of the Gunners that he would have us the fastest Artillery in the Fleet or see us all drop dead at our guns from fatigue.  This was no idle boast.  Work and work we did.  He, the Captain, has paid for powder from his own pocket that we might fire the Guns more frequently than is ordinarily required by the Service.  He believing that dry Firing alone does not ready the men for Battle.  All the while he stands by with his time piece, “Not good enough! Faster!”  he cries, and faster we go  There is much Labour and shouting and sweat. Much as in actual Battle- without the Blood under our feet, of course.  Our hard work has paid off though aswe are Each given an extra Gil of rum and two of Grog for our pains. 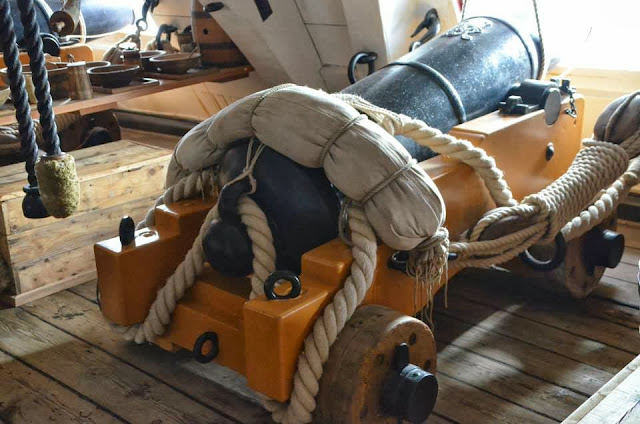 You would think me quite deef after a month or two of this but the Deck Officer had us stop our ears with tow and wax. None of the Boys liked this at first but now I believe to a Man they are Grateful for this kindness.  He says it is no Kindness but makes an effiecient crew- for how in H- can we hear his curses if we are deef as a stone  The Captain in his exortations to us has us believe that a smaller Ship may yet defeat a larger one by way of a disciplined gun crew. And by Jove after a time at this I believe him right.

Our gun is numbered 7, witch of course is good luck and I believe She favours us.  We have on our Crew a red Indian from America- taken from a Yankey Whaler and a black Jamaican. Butwe are all well drilled and Disciplined and if I may say it the best Gun crew on the entire Ship.  We are excused from some other duties as Artillery men and are much favoured by the Captain. Which causes some jealousy from the other Boys.  Also we have been given new Cloathing and all green ribbons for our Hats to mark us as gunners.  You would think us the Captain's Launch crew if you saw us lined up on the Deck as smart a show as we make!

I have another surprise for you. I know you do not forget the beautiful Negress with the Cinnamon Skin and yellow eyes- I wish I could see the smile on your face that I know must be there as you read this. Oh the memories! I was walking through the Market whenlast we were in St. George in Bermuda.  Often I had thought of Her whilst laying in my Hammock at night when I learned we were bound for this place. As I and some of my Mates walked though the Market I hear a cry from that Angelic throat- “Char Lay Char Lay is it you for true.”  She leaps into my arms verily knocking me to the cobbles.  When I work my way our from under her embraces and kisses you would have given your Grog ration to see the looks on those old Tars faces.

“How now Carpey, What is this?” This is their name for me, but that is a story for another time. But on to Margarite.

Oh how this unexpected meeting set my heart to pounding. As I helped her up I look into those yellow Eyes and, Jesus help me, if I Did not fall in love all over again.  She is kissing me again and I can feel my face Pulse. At length I look around to see if the whole World is looking at our Spectacle and standing directly behind me is the biggest, blackest Man you have ever seen, staring, with a Countenance that would surely melt a Stone, Directly into my eyes.  Margarite says with a veritable squeal,  “Char Lay, you must Greet my new Husband, Marcelle”.

I can see Tell you at that instant I would rather have faced the entireFrench fleet alone than to have been Standing there looking up into the Eyes of this Giant!  Sweet weeping Jesus, I am a dead Man.  Even the other boys stood in silence, no doubt ready to Flee back to the safety of the Ship at any moment. This Behemouth suddenly lifts me into the air Squeezing me so tightly against his Chest that I could not breathe if I had wanted to. But that was not a Concern at all.  The fear that Siezed me at that instant had stopt all thought of anything and my brain clean forgot to tell my lungs to work as God had Ordained.

At length He sets me on the Ground and with the widest smile he says to me  “I have heerd much stories of you from my beautiful Wife.  Is she not beautiful, yes?”

“No!  Yes!”  Said I.  Then praying that my death would be swift but fearing it would be very slow and painful.  Suddenly he laughed a laugh that echoed down the Street and through the Crowd, which had now given us a very wide Bearth.

“Come Marcelle give drinks for Char Lay and his Friends,” says Margaritte. At this the boys cheered. Then they, I, and the long forgotten Margaritte slipped dutifully down the street following the giant to an old awning set up off a Veranda in their part of Town. Old Tote, who is one of my mates, says in my ear, “Reckon he means to get us in our Cups and then cut all our throats?”

Marcelle stops and looks at him and says, "Not to worry, little Englais man.  Marcelle is a friends to the Sailors".  He picks up the well named Tote and carries him under his arm the rest of the way to the ale House.

All ended well, and I must tell you now, having time to reflect, that this ending is for the best.  But, oh, how I do pine after those yellow eyes and that sweet voice of the finest silk.  Maybe in another life. I fear I have rambled too much and as paper is dear, I must close for now.  I trust you are well and in fine health and spirits. I miss you leading us in our old chantey songs. None of the Boys on board the Edward sing with the same lust and joy as our old Ship’s Carpenter.


Godspeed and live well.
I remain affectionately, your friend,

p.s. This Letter was taken down by Midshipman B. Hillman as told to him by Mr. Grierson, Able Seaman.  He says he continues to Work on his Letters as you taught him and hopes that his next Letter will be in his own Hand.