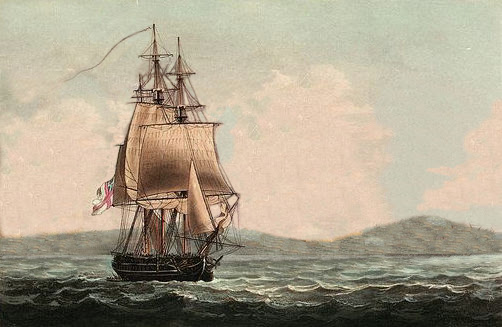 There has been a great deal of celebration, what with Christmas and our recent captures. We have been back and forth to the Poictiers several times to dine.

It would seem that my exposure to the winter air above decks and in the longboat has laid me open to a newly formed cough that I cannot get rid of. I am quite cross about it, for there is far too much to be done for me to be sick. And I fear that even Vasserman will attest that I can be a bit unpleasant when I am, myself, ill.

It is attended with a fever and I am quite tired and have a raw throat from all the damn'd coughing. It is, I fear, the enemy despised, the much dreaded cold.

Vassermann is ditirmined that I be bundled into my cot with every blanket available to 'break' my obstructed perspiration. He has placed a blanket 'round my shoulders every time he has passed by me at my desk this morning.

To ease my cough, I have been dosing myself with a private mixture of equal parts honey, lemon-juice and sugar-candy. A table-spoonful taken by mouth at my pleasure does help ease the cough.

Baptiste, my mate, knows well enough to stay away from me unless his assistance is requested. Instead, I have given over my daily duties to him in an attempt to keep him from feeling any obligation of calling upon me in my current state.

from:
DOMESTIC MEDICINE or, a TREATISE on the PREVENTION And CURE OF DISEASES BY REGIMEN And SIMPLE MEDICINES. WITH An APPENDIX, containing a DISPENSATORY for the Use of Private Practitioners.
By WILLIAM BUCHAN, M. D.
Fellow of the Royal College of Physicians, Edinburgh.
THE ELEVENTH EDITION.

CHAP. XXIX.
OF COLDS AND COUGHS. 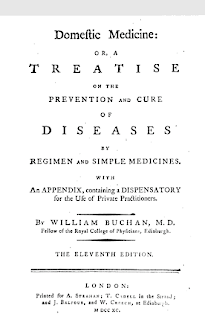 When oppression of the breast, a stuffing of the nose, unusual weariness, pain of the head, &c. give ground to believe that the perspiration is obstructed, or, in other words, that the person has caught cold, he ought immediately-to lessen his diet, at least the usual quantity of his solid food, and to abstain from all strong liquors. Instead of flesh, fish, eggs, milk, and other nourishing diet, he may eat light bread-pudding, veal or chicken broth, panado, gruels, and such like. His drink may be watergruel sweetened with a little honey; an infusion of balm, or linseed sharpened with the juice of orange or lemon; a decoction of barley and liquorice, with tamarinds, or any other cool, diluting, acid liquor.

Above all, his supper should he light; as small posset, or water-gruel sweetened with honey, and a little toasted bread in it. If honey should disagree with the stomach, the gruel may be sweetened with treacle or coarse sugar, and sharpened with the jelly of currants. Those who have been accustomed to generous liquors may take wine-whey instead of gruel, which may be sweetened as above.

The patient ought to lie longer than usual a-bed, and to encourage a gentle sweat, which is easily brought on towards morning, by drinking tea, or any kind of warm diluting liquor. I have often known this practice carry off a cold in one day, which in all probability, had it been neglected, would have cost the patient his life, or have confined him for some months. Would people sacrifice a little time to ease and warmth, and practise a moderate degree of abstinence when the first symptoms of a cold appear, we have reason to believe, that most of the bad effects which flow from an obstructed perspiration might be prevented. But, after the disease has gathered strength by delay, all attempts to remove it often prove vain. A pleurisy, a peripneumony, or a fatal consumption of the lungs, are the common effects of colds which have either been totally neglected or treated improperly.

Many attempt to cure a cold, by getting drunk. But this, to say no worse of it, is a very hazardous experiment. No doubt it may sometimes succeed, by suddenly restoring the perspiration; but when there is any degree of inflammation, which is frequently the cafe, strong liquors, instead of removing the malady, will increase it. By this means a common cold may be converted into an inflammatory fever.