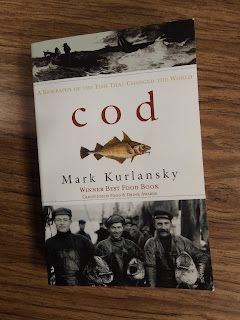 Cod
by Mark Kurlansky
A brief review by Tony Gerard

I’d often wondered since how a country on the ocean (and having access to fresh seafood I assumed) came to be so fond of a slated fish from so far away. This book told me why.

Kurlansky takes the history of humans and codfish from their beginnings up to the late 1990s, when the book was written. Ever heard of the Cod Wars? Me neither, but they happened, and they were a big deal at the time. I between chapters the author throws in little edible tidbits about cod- usually a historic recipe. He covers the basics, although not in great detail, about cod fishing- both historic and modern.

If an Acasta had a back-story of being a former fisherman, or coming from a fishing family this would be a book I recommend. Heck, if you like to eat fish, or are just interested in odd history I recommend this book. It’s well written and an easy read. It even encouraged me to check on where codfish stocks stand today (Spoiler alert- the picture is not as bleak as they did when the book was published).