A Report from the Field 2

We arrived in New Boston on Friday and laid out our camp atop a grand hill that overlooked the site of the annual trade fair. The wind was constant from SWbS and played havoc with the canvas as we attempted to get it set up. Our camp consisted of a large 10x10 tent, a 12x12 dining fly flanked by a multitude of wedge tents.

Our camp was overjoyed to learn that Brock's forces had taken Detroit and had even come in so far as New Boston. The Americans were sure to surrender New Boston after such a morale crushing blow as Detroit! 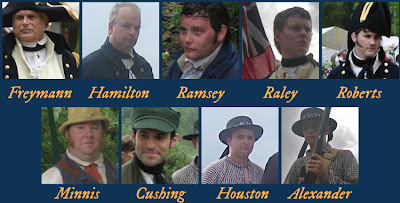 If the area was taken for the King, it would make our time in the area all the more pleasant, giving us our liberty to shop and socialize a bit instead of having to sneak about like criminals or spies.

Lt. Ramsey, in plainclothes, secured the aid of the local Indian Agent, an Irishman by the name of Mr. Kelly, to follow Miss Waterman, the courier who was to pass off the packet to the American Spy. He was exactly as I would have imagined such a character, rough-hewn and native in his dress and eccentric in his appearance.