A Report from the Field 3 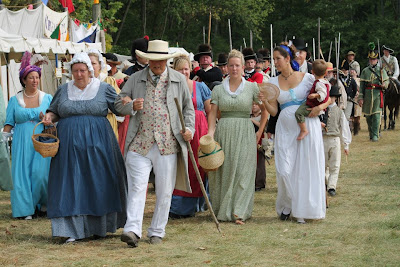 Saturday came and the Fair opened with the usual amount of enthusiasm and excitement.

Before the official opening ceremonies, Mr. Raley was ordered to take a small detachment out to the fairgrounds and pass out bills to the merchants as well as posting them on the local 'birdhouses' and in other such publick places. It was a small broadside advertising a Fifty Pound Reward for information leading to the safe return of the stolen documents.
At opening ceremonies, New Boston surrendered to Brock without a shot, and Captain Freymann was there at Brock's side as the announcement was made to the populace. There was the usual jeering and expressions of displeasure, but when the local militia was dismissed, they offered up no trouble and the fair went on as usual.
Afterwards, the Acastas made their way to the Hickory Tavern located upon the hill at the Northeast end of the fair. From this vantage point we surveilled the courier as she went about the business of delivering the packet of stolen documents to the yet unknown American Spy.

She made her way away from the Tavern down Medicinal Springs Road, stopping along the way to socialize on several occasions, but not passing the packet off to any of them. We then lost sight of her briefly, as she ducked just out of our line of sight.

I spotted her a few moments later as she stood at the South end of Wood Workers Lane. There she stood, as bold as you please in the middle of the road with Jesse Mains. They stood there for a few moments and conversed, and from such a great distance it appeared that she might have passed him something, but Capt Freymann and I were uncertain.

She then left his company and disappeared into the thick crowds again. We did not see her again until we were certain she had made the drop, and Capt Freymann and his Lady, Mrs. Ashbourne, went to retrieve her.