A Report from the Field 9

It was not long after this that the final piece of the puzzle fell into place in my mind. This occurred a little further up Medicinal Spring Road when I noticed Mrs. Cooper walking with two women, one of whom was the unknown woman in the Blue Dress and Purple Turban mentioned to us by Mr. Kelly!

This was the link I needed. Mrs. Cooper was the connection between the woman in Blue with Miss Waterman. I was more certain than ever that the woman in Blue had the packet in her possession, I glanced at the bulge in her reticule, it was the perfect size to be the packet.

I found Capt. Freymann again and told him of my suspicions and respectfully suggested that we assemble all the Acastas to make the arrest. We did that very thing and less than a quarter of an hour we were all gather'd and approached en masse as she took her ease at the Hickory Tavern atop the hill.

Capt. Freymann greeted the woman and asked that he might have a look in her reticule. She submitted to his request. I watched eagerly, knowing that Capt. Freymann would, any moment pluck our victory from her little bag.

But that moment of triumph did not come. Capt. Freymann's face fell as he searched. The reticule bore no packet!

The Captain passed the reticule down the table to me to have a look through, and I too found nothing!

I stood there for a long moment with the eyes of all the Acastas upon me. The failure of our mission seemed imminent and my heart dropped. I was CERTAIN that she was the American Spy, I looked at her and tried to discern where else the packet could possibly be?

I stood at the end of the table and it occurred to me.

I wonder madam if we might have a look underneath your great bonnet, asked I?

She took off her bonnet and there it was! She removed the packet from beneath the large headpiece.

Back at the Acasta camp later that afternoon, Capt. Freymann burned the documents that had been contained within the packet to ensure that they could not be recaptured. He then sorted through the money from the packet and divided it up in the same manner as the Admiralty splits up prize money, and gave each man his share. 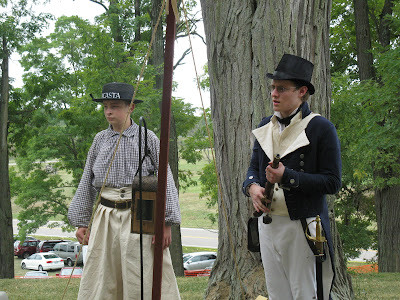 The Acastas spent our final hours in New Boston before breaking camp with full pockets and glad spirits that we had accomplished our mission for King and Country.

It is now back overland and a rendezvous with the Acasta for our merry band.