A Report from the Field 8

On Sunday, I had a strong inclination to search the French Lace Merchant, Monsieur LeFarceur de Villeverte, the Acasta Ship's Clerk Mr. Cushing and later that day Miss K. Nowack a particular friend to Miss Waterman.

I made my way to Monsieur de Villeverte's lavish tent and discussed with him the trouble with the lost packet. He gave me his word as a gentleman that he had neither seen or received such a packet.
Later that morning I took up the Bosun's mate, Mr. Alexander, and detained Mr. Cushing. I searched his market wallet thoroughly to no avail. But there was something suspicious in his manner that did not signify. It was a knowing look in his eye whilst I went through his things that I did not care for.

That Afternoon I was walking along Dudery Street with Captain Freymann and his Lady when we spotted Miss Waterman shopping with Miss Nowack. Miss Nowack had a small basket under her arm that I took notice of, and as they stopped to talk with us, I pressed her to allow me to search it. Another dead end, her basket contained nothing of value to us.

I was beginning to lose hope that we would discover the American Spy.

In an effort to make certain that I had covered every inch of ground, I had another talk with Mr. Kelly, the Indian Agent who had followed Miss Waterman to begin with. We discussed again the route she had traveled while delivering the packet. I asked them if, at any time, Miss Waterman had been out of their sight? Mr. Kelly informed me that they had stayed close to her the entire time, save when she went behind the Black Horse Tavern on Medicinal Springs Road.

Behind the Tavern? I had not understood this to be the case originally. And I pressed Mr. Kelly,  had he lost sight of her behind the canvas of the Tavern for a few moments? Yes, for a minute or so said he.

Was she back there long enough to pass off the packet do you suppose? inquired I.

He and his wife both agreed that she might have had enough time to drop off the packet to someone. And that when she made her exit, the unknown woman with the Blue Dress and Purple Turban exited shortly thereafter. 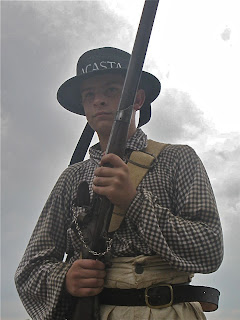 I thanked Mr. Kelly and once again fetched after Mr. Alexander and bade him bring his musket along. We arrived in good time at the Black Horse which was busy with the usual fair-going crowd. Mr. Alexander and I made our way through the canvas behind the tavern itself and found ourselves in a space I was unaware existed. There was a great area sectioned off from the eyes of the publick by tall walls of canvas.

We looked around for a moment before we were approached by a slender, bearded fellow in an apron who was smoking a little cigarillo, he desired to know if he might help us.

I asked him if he had seen a lovely young lady there the other morning in a white dress with a green spencer. I went on to explain that she had 'lost' something there the morning before. Mr. Alexander caught my eye at this and smiled slightly.

The Tavern man was very eager to be helpful after that, and insisted that he HAD seen such a young lady, and even went on to comment on how lovely she was. She had come in, stood about for a bit, then left to the best of his knowledge.

Did she perchance make use of the facilities, asked I, pointing to the large 'necessary' behind me.

He insisted she did not.

Was there anyone else there with her, continued I?

The Tavern man said that he could not recall there being anyone, but that he had not been there with her the entire time. I thanked the fellow and exited via the canvas as he insisted he'd be on the lookout for the 'lost' packet for us.