A Report from the Field 4

It didn't take but a short time for the Captain and his Lady to return with Miss Waterman. We sat her on a bench at the Hickory Tavern and began to ask her questions about where she had been and who she had encountered. Miss Waterman was as lovely as ever in her white dress and green spencer. 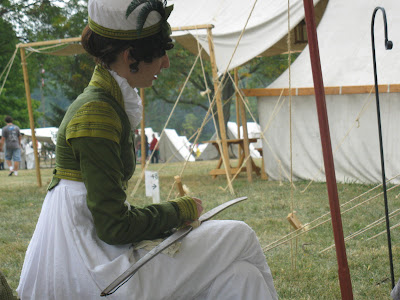 We gave Miss Waterman her parole and advised her that we may have need of her in the future.

We returned to the fairgrounds and questioned the British Indian Agent who followed Miss Waterman. The fellow had even used his own wife to aid in the work! They relayed the route taken by Miss Waterman in her mission to deliver the Packet to the American Spy. Mrs. Kelly relayed in great detail Miss Waterman's exploits, she had met with a large group of fashionable ladies on the road next to the furniture shop, she had encountered Mr. Jesse Mains from Kentucky, she encountered the Tumbusches, and then disappeared for a bit behind the Black Horse tavern where she could not be seen by the Kellys. They said when she finally emerged, she was followed shortly thereafter by an unknown woman in a blue dress and a purple turban.

Mrs. Kelly claimed that she had SEEN with her own eyes Miss Waterman pass the packet to Mr. Tumbusch. She was very adamant about it.

We now had a workable list of suspects which consisted of:
Tom Tumbusch - former Acasta and a mutual friend of Myself and Miss Waterman
Jesse Mains - a fellow from the Kentucky Territory
The Woman in blue - an unknown element

Mr. Raley and his division accompanied me to Mr. Barker's wagoneer camp where the oxen lay in the shade avoiding the mid-day heat. There stood Jesse Mains with his rifle in hand as he spoke with a fellow there in camp.

We milled about the entrance for a bit, I taking an opportunity to have a look over Mr. Main's person in an attempt to ascertain if he might have a place to hide the packet. He was in possession of a small pouch and a small wallet on his belt either might be a place to hide the documents. I am not ashamed to confess that I approached Mr. Mains with some trepidation, knowing his reputation as a frontiersman from the Kentucky Territory. I knew that if he decided to fight, the lot of us might not be able to prevent his escape.

We had the strategic advantage for sure, the lot of us blocking the only clear exit from camp, and Mr. Barker and Mr. Main's conversation companion were not obviously armed.

I waited for there to be a lull in their conversation when I asked loudly, "Mr. Mains? May we have a word with you?"

He seemed surprised, but moved toward us slowly and with deliberation, I breathed a sigh of relief when he passed his weapon off to Mr. Barker who laid it casually across his lap.

I questioned him as to his encounter with Miss Waterman that morning. He seemed quite at a loss, and claimed not to have been passed anything by the young lady in question. While he did not submit to a search, he did show us the small pouch and the wallet on his belt, and I was satisfied that they did not hold the packet we sought.

We thanked Mr. Mains for his cooperation and requested that he not leave the area in the event that we might have further need of him. As we left the camp, it occurred to me that Miss Waterman had met with him directly in the middle of the road where she might be seen easily by any onlookers.

I was now more convinced than ever that Mr. Mains was not in possession of the packet.